Another Tour of Scala

Variances gives a very high-level overview of implementing contravariance and covariance with respect to Generics. Examples and definitions below. 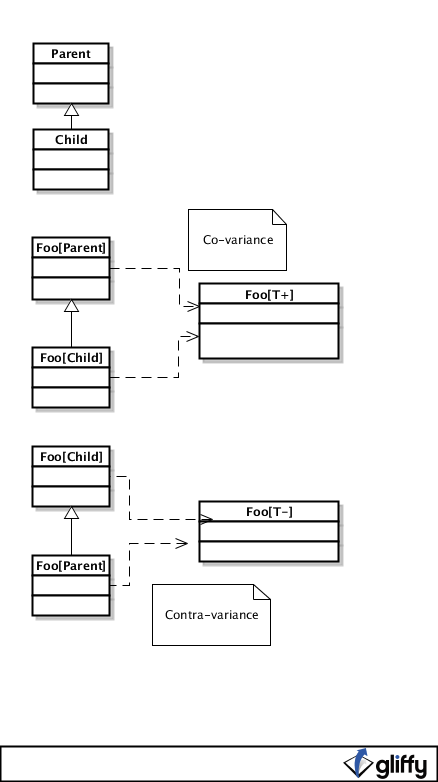 In the definition of class Configuration, we use the +T to indicate that that T is a covariant type. This means that, in our example, Configuration[AdvancedStringValue] is a proper subclass of Configuration[StringValue]. If the +T were changed to a simple T, this code would not compile.

Given that we have covariance, Contravariance exists to solve some problems that can arise when designing certain classes. Scala’s function aspects rely heavily on this.

Why would we need or want to do this?

An example should illuminate why. It’s a bit long, so bear with me (this is a more complicated concept than some of the others being discussed).

Since both expose a code and a description, we pull these up into a superclass called Lookup. Further, we also have a class that creates HTML <SELECT> controls based upon a list of Lookup objects and it exposes a render method that allows us to pass in a function to control the human-readable value for any given Lookup instance.

This code doesn’t compile, even though you might thing it should.

You might think that since Country is a subclass of Lookup, then the function countryValue should be a subtype of the function lookupValue and that you should, therefore, be able to pass it in to render. Especially since selector was created around a list of Country objects!

Consider a slight change to our main application code to the following:

The code still won’t compile, but it makes more sense now why it shouldn’t: you wouldn’t want to use countrySelector on a USState, because USState has no postCode attribute.

So, what’s going on here? Let’s look at the definition of the function type. Our function

could be written as

Here, we’ve created a special CountrySelect that operates just on Country objects. Of course, countryValue works, but notice how lookupValue also can be passed. Since lookupValue is a subtype of countryValue, we can safely pass it in.

This is because the code using the function valueMaker is definitely going to send it a Country object. Since lookupValue accepts any Lookup, and since Country is a subtype of Lookup, we know for a fact that lookupValue can safely operate on a Country object. Therefore, it it safe to pass in to render.

This took me quite a while to totally get. But, it’s all in aid of maintaining static types while providing flexible syntax and features…exactly what Scala is all about. The cool thing about that, as compared to a similar implementation in a dynamic language (like Ruby) is that the compiler can catch the screwup we made by changing line 21 to use USState instead of Country.

My Thoughts on this Feature

This took me a while to grok, and I hope the example above helps demonstrate why its needed and what it means. This is where static typing starts to get really confusing, although things tend to work out right. The Ruby way of dealing with this is, well, to not deal with it; you are on your own to pass the right thing in. If you don’t, hopefully your unit tests cover it.

Scala lets you document your intent and have the compiler complain when the code violates it. It’s tricky, however, to read scaladoc and/or compiler output and know what’s wrong.